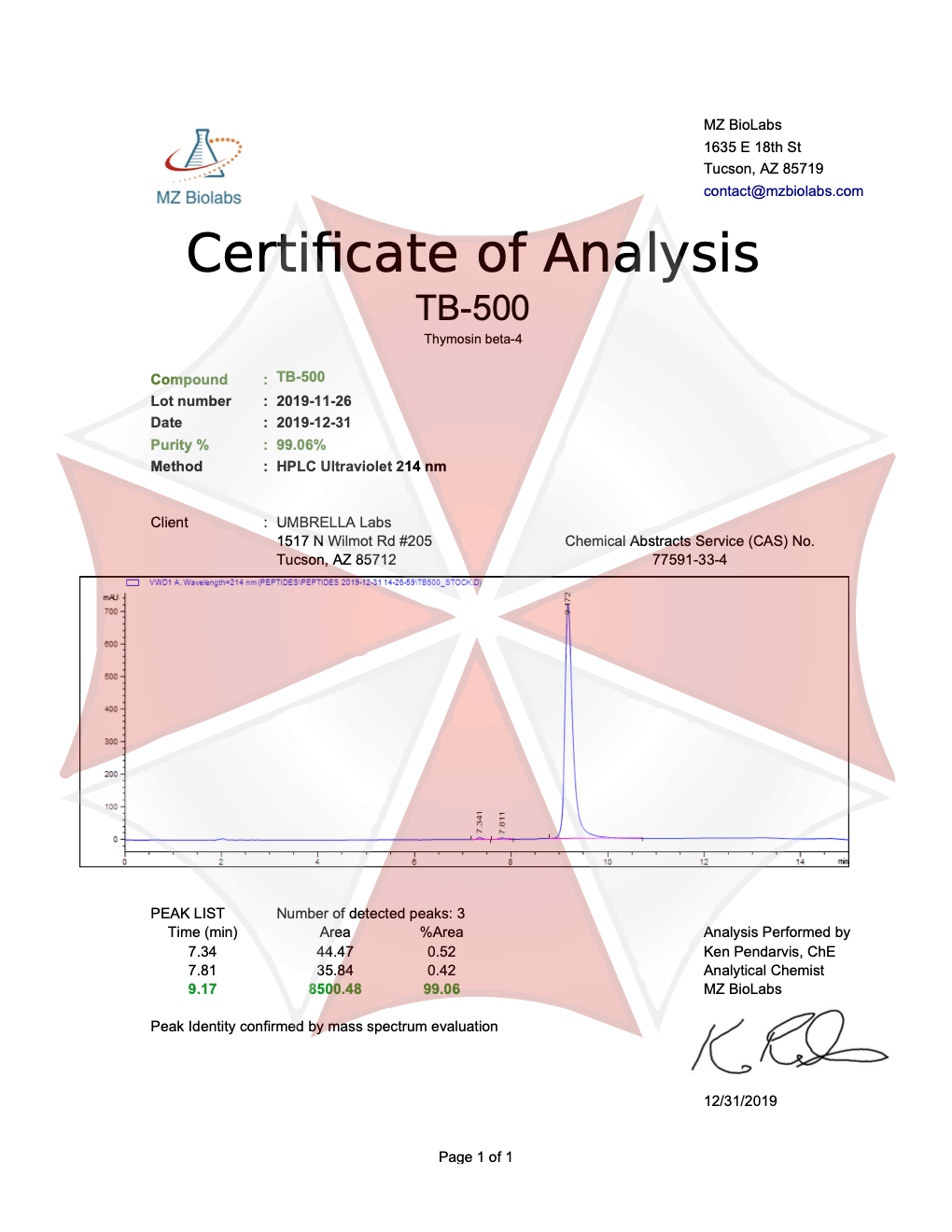 Previously I discussed the properties, uses, and numerous benefits associated with the consumption of the synthetic peptide BPC-157. It is a peptide that can yield notable healing abilities within the body. BPC-157 is not the only peptide with these qualities. Another similar peptide, that is perhaps less well known, is called “TB-500”, also known as Thymosin Beta 4. A precaution: unlike BPC-157, TB-500 is absolutely banned by WADA and most other global sporting organizations both in-competition and out-of-competition. You should NOT use this if you are competing in any such sanctioned sport as it definitely falls under the banned category of “Peptide Hormones, Growth Factors, Related Substances and Mimetics (S2)”.

A veterinary preparation known as TB-500 and containing a synthetic version of the naturally occurring peptide LKKTETQ has emerged. The peptide segment 1 7LKKTETQ2 3 is the active site within the protein thymosin β4 responsible for actin binding, cell migration and wound healing. The key ingredient of TB-500 is the peptide LKKTETQ with artificial acetylation of the N-terminus. TB-500 is claimed to promote endothelial cell differentiation, angiogenesis in dermal tissues, keratinocyte migration, collagen deposition and decrease inflammation. In order to control the misuse of TB-500 in equine sports, a method to definitely identify its prior use in horses is required. This study describes a method for the simultaneous detection of N-acetylated LKKTETQ and its metabolites in equine urine and plasma samples. The possible metabolites of N-acetylated LKKTETQ were first identified from in vitro studies.

The parent peptide and its metabolites were isolated from equine urine or plasma bysolid-phase extraction using ion-exchange cartridges, and analysed by liquid chromatography–mass spectrometry (LC/MS). These analytes were identified according to their LC retention times and relative abundances of the major product ions. The peptide N-acetylated LKKTETQ could be detected and confirmed at 0.02 ng/mL in equine plasma and 0.01 ng/mL in equine urine. This method was successful in confirming the presence of N-acetylated LKKTETQ and its metabolites in equine urine and plasma collected from horses administered with a single dose of TB-500 (containing 10 mg of N-acetylated LKKTETQ). To our knowledge, this is the first identification of TB-500 and its metabolites in post-administration samples from horses, but isn’t detected on a normal urinalysis test.

Peptides are two or more amino acids linked together in a chain, and TB-500 is a simply a short peptide fragment of an actual hormone – a hormone called “Thymosin Beta-4”. TB-500 and Thymosin Beta-4 are not exactly the same, although you’ll often see the two names used interchangeably in the “peptide world.” It’s much harder to get your hands on true Thymosin Beta-4, whether for research use, equine enhancement, athletic performance enhancement or bodybuilding. But TB-500’s peptide sequence shares most of the properties of Thymosin Beta-4, and it’s more economical to produce, thus easier to find. TB-500 is a synthetic peptide that has been directly linked to impressive, extremely enhanced recovery times for muscles and other bodily tissues. It plays a vital role in building new blood vessels and blood cell production, muscle tissue fibers, and cell migration. TB-500 acts a bit differently, and perhaps more effectively than BPC-157.

Thymosins were discovered in the mid 1960’s, when Allan Goldstein from the Laboratory of Abraham White at the Albert Einstein College of Medicine in New York studied the role of the thymus in development of the vertebrate immune system. Since then, Dr. Goldstein founded a company that creates thymosin alpha 1 for the purpose of increasing immune cell activity, and thymosin beta 4 (TB-500) to promote wound repair and healing.

TB-500 has been used extensively for race horses to prevent the formation of adhesions, although it is not a prescribed veterinary drug. It’s an injectable peptide with limited human use, primarily experimental. However, reports of human use of thymosin dates back as far as 1974 when a young girl became the first person to receive injections of thymosin because she was diagnosed without a functioning thymus gland.

The cells of adult animals can be grouped into three general categories with respect to cell proliferation. A few types of differentiated cells, such as cardiac muscle cells in humans, are no longer capable of cell division. These cells are produced during embryonic development, differentiate, and are then retained throughout the life of the organism. If they are lost because of injury (e.g., the death of cardiac muscle cells during a heart attack), they can never be replaced.

In contrast, most cells in adult animals enter the G0 stage of the cell cycle but resume proliferation as needed to replace cells that have been injured or have died. Cells of this type include skin fibroblasts, smooth muscle cells, the endothelial cells that line blood vessels, and the epithelial cells of most internal organs, such as the liver, pancreas, kidney, lung, prostate, and breast. One example of the controlled proliferation of these cells is the rapid proliferation of skin fibroblasts to repair damage resulting from a cut or wound. Another striking example is provided by liver cells, which normally divide only rarely. However, if large numbers of liver cells are lost (e.g., by surgical removal of part of the liver), the remaining cells are stimulated to proliferate to replace the missing tissue. For example, surgical removal of two-thirds of the liver of a rat is followed by rapid cell proliferation, leading to regeneration of the entire liver within a few days.

There are several distinct types of blood cells with specialized functions: Erythrocytes (red blood cells) transport O2 and CO2; granulocytes and macrophages are phagocytic cells; platelets (which are fragments of megakaryocytes) function in blood coagulation; and lymphocytes are responsible for the immune response. All these cells have limited life spans, ranging from less than a day to a few months, and are continually produced by the division of a common stem cell(the pluripotent stem cell) in the bone marrow. Descendants of the pluripotent stem cell then become committed to specific differentiation pathways. These cells continue to proliferate and undergo several rounds of division as they differentiate. Once they become fully differentiated, however, they cease proliferation, so the maintenance of differentiated blood cell populations is dependent on continual proliferation of the pluripotent stem cell.

Now that we have explored the physiological background of animal cells and how they may be impacted by TB-500, let’s take a closer look at the ways it can benefit the body directly. The main functionality of TB-500 hinges on the ability to upregulate cell building proteins such as actin, which is a protein that forms (together with myosin) the contractile filaments of muscle cells, and is also involved in motion and metabolism in many other types of cells. Upregulation of actin allows TB-500 to promote rapid cell proliferation of embryonic cells, which then

differentiate to produce the many specialized types of cells that make up the tissues and organs of multicellular animals. As cells differentiate, their rate of proliferation usually decreases, and most cells in adult animals are arrested in the G0 stage of the cell cycle. A few types of differentiated cells never divide again, but most cells are able to resume proliferation as required to replace cells that have been lost as a result of injury or cell death. In addition, some cells divide continuously throughout life to replace cells that have a high rate of turnover in adult animals. Cell proliferation is thus carefully balanced with cell death to maintain a constant number of cells in adult tissues and organs.

TB-500 has been shown to offer many of the same effects of growth hormone (GH), including:

In the majority of humans who experiment with TB-500 injections, TB-500 is most often used for acute injuries or wounds that would heal slowly (when you need them to heal quickly), or for more chronic injuries where the healing doesn’t seem to be happening.

Pull 1ml of water into the syringe and inject it into the vial with powder. You should never shake the vial when mixing. You should not inject the water directly into the powder with force, but rather let it gently slide down the inside of the vial. If it bubbles up, you should put the vial in the refrigerator and leave it there for about 15-30 minutes. The bubbles will be gone by then. You should then gently rotate the vial between your fingers until all of the powder has dissolved (it takes about 3-4 minutes).

The tb-500 has a systematic effect regardless of where it is injected. Some believe that thymosin beta-4 should be injected as close to the injury as possible however there is no evidence to show this would be superior. It can be injected subcutaneously (stomach fat) or intramuscularly (shoulders, thighs, buttocks). Injections should be given in different sites (rotated) each time. Depending on the spot, you can either feel nothing or you can feel slight pain - you will learn your favorite spots in time.

Prior to injecting clean the injection spot as well as the vial rubber stopper with an alcohol swab. Make sure there are no air bubbles in the syringe. For subcutaneous injection fully insert the needle at a 45 degree angle, for intramuscular insert it at a 90 degree angle.

TB-500 comes in freeze-dried (lyophilized) form and must be reconstituted with bacteriostatic water for administration. The most common dosing range in human use is 2.0 to 2.5mg of TB-500 two times per week for approximately 4-6 weeks. Once the 4-6 weeks of use is complete, once the injured area has improved, some users will reduce to one to two injections per month for injury prevention. Many users report greater muscle flexibility when using TB-500, thereby reducing further injury potential.

Higher doses of TB-500, those beyond 2.0-2.5mg twice per week, there is no data available to support how much stronger such dosing plans will be. There is very little data to support the lower doses beyond anecdotal but even less when it comes to higher doses. As healing and

injury prevention is the primary point of use and the 2.0-2.5mg plans seem to carry a high rate of success, this does lend to the idea that higher doses are unnecessary.

Effects of TB-500 are dosage dependent and usually become noticeable within days. For some people it takes up to 4 weeks. Individuals may respond to the therapy differently, however some effects are generally observed by most people.

For those who have cancer, it's best discuss TB-500 with your oncologist for the most up to date information.