About our LGD-4033 LIGANDROL SARM for sale 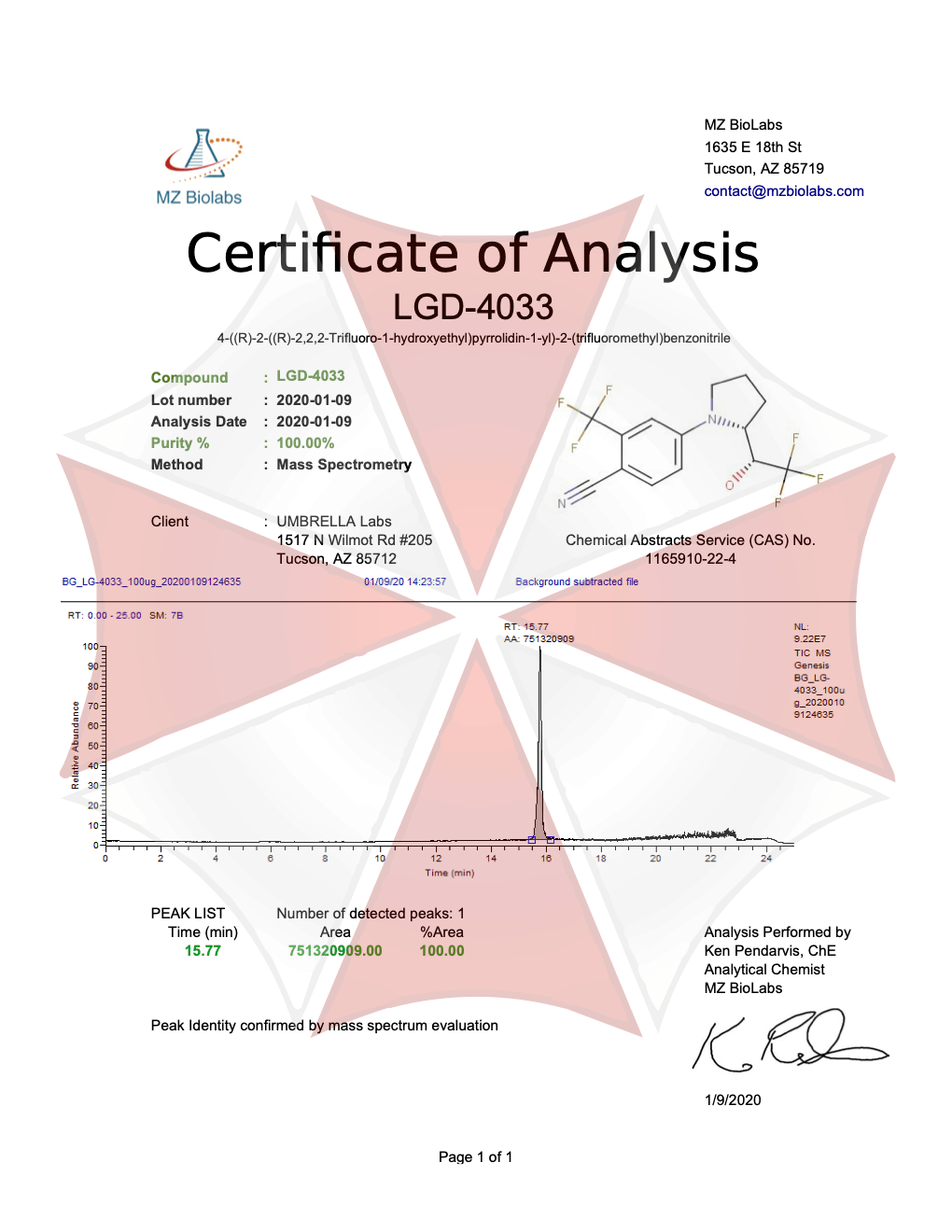 LGD-4033 is an orally-available, non-steroidal SARM that has delivered exceptional results in both preclinical and clinical trials, and it continues to be the subject of high-impact research. It is being investigated clinically and preclinically for a number of indications: increased muscle mass and strength; increased bone formation and strength; and central nervous system benefits including enhanced cognition and libido.

Anabolicum (LGD-4033) is categorized as a SARM. LGD-4033 has the capability to bind to the AR (androgen receptor) with an extremely high affinity, in a manner that is tissue selective. It was originally developed to treat muscle wasting in cancer patients, age-related muscle loss as well as acute and chronic illness. LGD-4033 has been shown to produce similar therapeutic benefits to exogenous testosterone but with a better safety profile. This is due to it's tissue-selective mechanism of action in conjunction with an administration taken orally. It also contains the ability to have anabolic activity in muscles, anti-resorptive and anabolic activity in bones as well as a selectivity for muscle and bone versus prostate and sebaceous glands. LGD-4033 has also been shown to promote tissue healing similar to Ostabolic (MK-2866) and Nutrobal (MK-677). 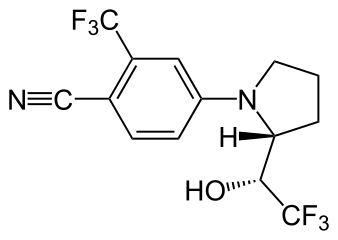 In a Phase 2 clinical trial, men receiving LGD-4033 showed a statistically-significant, dose-dependent increase in total lean body mass after 12 weeks of treatment vs placebo. Crucially, this study also demonstrated increases in appendicular lean body mass. There were no instances of drug-related adverse effects all for doses tested.

Change from baseline in lean body mass is shown.

LGD-4033 was safe and well-tolerated over the range of doses that were evaluated over a 3-week period. Even during this short treatment period, there was clear evidence of the compound’s androgenic activity, as reflected in the increase in lean body mass, and significant suppression of sex hormone-binding globulin and cholesterol levels. In spite of demonstrable androgenic activity, serum prostate specific antigen (PSA) did not change significantly. This study also reveals other attractive attributes of LGD-4033: it has a prolonged circulating half-life, dose-proportional systemic circulation, and a strong relationship between the dose and the outcome. The gains in lean body mass were similar to those reported with other SARMs [1], yet LGD-4033 was able to produce similar gains in a substantially shorter time frame (5 weeks vs 12 weeks).

This study had many features of a good trial design; subject allocation by randomization, concealed randomization, blinding, and independent appraisal of safety data by a Data and Safety Monitoring Board at Boston University. Since it was an ascending dose study, the study did have some inherent constraints. For instance, the doses of study medication were administered sequentially in ascending order rather than in random order. The sample size, although substantially larger than in most phase I ascending dose studies, was not based on considerations of effect sizes, as the study’s primary aim was to establish safety and tolerability rather than efficacy. Similarly, the 3-week study duration was not designed to demonstrate maximal effects on skeletal muscle mass and muscle strength which were not the primary outcomes of the trial.

In light of these inherent constraints on study design, it is particularly remarkable that significant dose-dependent gains in lean body mass were evident in this short duration, indicating this SARM’s substantial anabolic activity on the skeletal muscle. Several attractive pharmacokinetic features of this SARM are noteworthy: Its prolonged elimination half-life renders it amenable to once daily or even a less frequent dosing regimen. Daily administration of the drug was associated with dose proportional increase in systemic exposure resulting in predictable accumulation upon multiple dosing.

Previous human and animal studies have shown inhibition of muscle protein breakdown and muscle protein degradation pathways during testosterone administration, as potential mechanisms for increased muscle mass [4], [5]. LGD-4033 may also increase the number of muscle satellite cells by promoting both the proliferation of satellite cells and the differentiation of muscle progenitor cells [6]–[8]. However, those mechanisms were not investigated directly in this study.

LGD-4033 has been evaluated in two other Phase 1 clinical trials: the initial Phase 1 safety, tolerability and pharmacokinetic study was conducted in 2006. This was followed by a 14-day Phase 1b clinical trial in 56 patients with mild hypercholesterolemia (high cholesterol). This study was initiated in 2007 and completed in 2008. LGD-4033 was shown to be safe and well-tolerated across doses ranging from 0.25 mg to 40 mg per day. There were no serious adverse events, and the frequency of adverse events in treated subjects was similar to placebo-treated subjects. There were no differences in heart rate, heart rhythm or blood pressure were observed between LGD-4033 and placebo-treated patients. Only mild increases in liver enzymes were observed at the higher doses of LGD-4033, along with dose-related mean shifts in thyroid hormone levels.

The clinical trial results also showed dose-related reductions in fasting low density lipoprotein (ie “bad” cholesterol) and fasting triglyceride levels at day 14. Significant placebo-adjusted low density lipoprotein reductions from baseline were observed at doses of >5 mg, while placebo-adjusted triglyceride levels were reduced by more than 30% at doses of >2.5 mg. In addition, statistically significant reductions of lipoprotein A and apolipoprotein B, which are believed to be positively associated with risk of developing cardiovascular disease, were observed in certain cohorts.

LGD-4033 has also demonstrated anabolic activity in muscles, anti-resorptive (ie. protection from bone loss) and anabolic activity in bone, and robust selectivity for muscle and bone verses prostate and sebaceous glands in animal models. The effects of LGD-4033 on bone strength, bone mineral content and bone mineral density were evaluated in ovariectomized female rats, which are rats that have undergone surgical removal of the ovaries. The ovariectomized rat model is a standard animal model for evaluating the effect of pharmaceutical agents in osteoporosis, because removal of ovaries stimulates high bone turnover and subsequent bone loss, creating a simulated post-menopausal state that models the metabolic changes in post-menopausal osteoporosis patients. As shown below, in ovariectomized rats, at the two highest doses, LGD-4033 produced significant increases in femur bone mineral content and bone strength relative to ovariectomized rats treated with vehicle. In addition, LGD-4033 demonstrated anabolic effects in bone formation rates, bone density, bone volume and trabecular thickness. 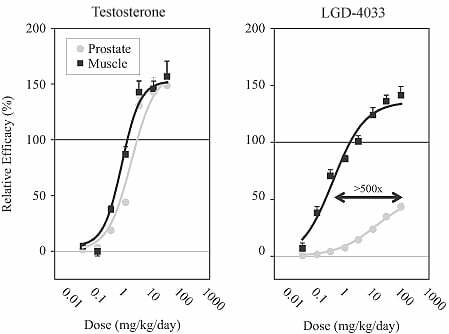 LGD-4033 demonstrates >500 fold selectivity for maintaining muscle weight relative to the effects on prostate weight. By comparison testosterone shows similar effects on both muscle and prostate tissues. These data suggest that LGD-4033 is highly tissue-selective for muscle potentially leading to an improved therapeutic profile relative to testosterone.

The tissue-selectivity of LGD-4033 was examined in a castrated rat model (Figure 2). The castrated rat model is a standard animal model for examining tissue selectivity for SARMs due to the rapid nature of muscle atrophy in castrated animals and the high sensitivity to muscle growth upon androgen-based treatment. Muscle mass can be restored with a potent androgen-receptor agonist, such as testosterone. Initially, rats are castrated or receive sham surgery. Sham rats are rats that receive surgical procedures that do not remove the ovaries or have other physiologic purposes. Upon recovering from the surgery, castrated and sham rats are administered either an active therapy such as LGD-4033 or testosterone. The effects of therapy in this model are assessed by measuring muscle and prostate tissue mass. Muscle mass in castrated animals treated with vehicle is assigned 0% relative efficacy, while muscle mass in non-castrated animals that underwent sham surgery is assigned 100% relative efficacy. For example, a castrated rat treated with a drug that demonstrates 100% relative efficacy would have equivalent tissue mass to a non-castrated rat.

In this model, LGD-4033 demonstrated greater than 500-fold selectivity for maintaining muscle weight at non-castrate levels relative to the effects on prostate weight. By comparison, testosterone shows similar effects on both muscle and prostate tissue. These data suggest that LGD-4033 is highly tissue-selective for muscle, potentially leading to an improved therapeutic profile relative to testosterone. 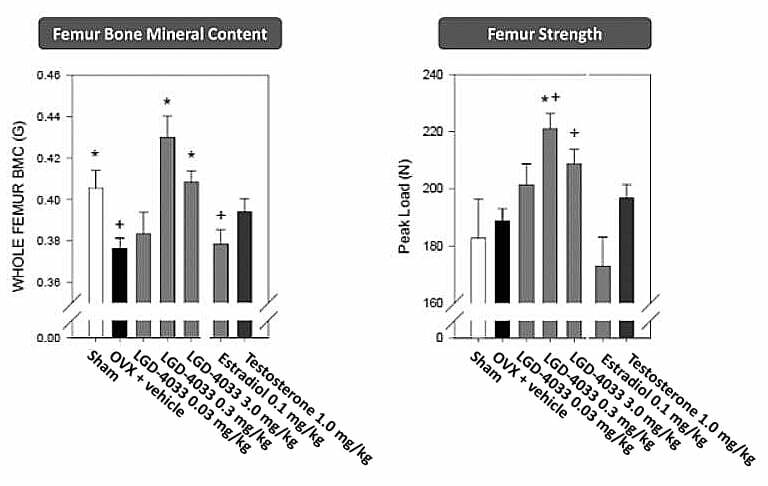 In rats, optimized dosing was shown to be 0.3 mg/kg body weight for preserving metrics of bone health. *p < 0.05

Skeletal fractures due to age-associated weakening of bones presents a growing problem in society, as more than a quarter million people are hospitalized for hip fracture alone in the US annually [9]. LGD-4033 is an attractive candidate for prevention of skeletal fractures and it has the potential to be an important new option for these patients by offering improved safety compared to currently available drugs based on its tissue selective effects. As muscle wasting and osteoporosis are common co-morbidities in the elderly, LGD-4033 may be particularly beneficial to frail, elderly patients by improving their mobility and quality-of-life, and reducing the risk of fall-related bone fractures.

In clinical trials, LGD-4033 has been shown to be safe and well-tolerated [10]. Adverse events were infrequent and similar between the experimental group and placebo group at all doses tested. Headache and xerostomia (dry mouth) were the most common events, yet without any evidence of a dose relationship. No severe drug-related or unexplained adverse events were recorded. One instance of cellulitis (in placebo group) and one instance of gastroenteritis (in the 0.3 mg LGD-4033 group) were severe but were not considered study drug related. There was no study discontinuation due to adverse events. There were no clinically significant changes in liver enzymes, hematocrit, prostate-specific antigen (PSA), or electrocardiogram (ECG) at any dose levels tested.

Storage: Use within 12 months. Keep in a cool and dark location.

Our Other Available Liquid SARMs Products: